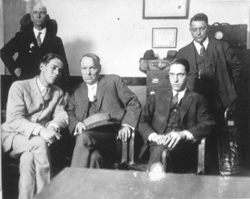 For Chicago, the Leopold and Loeb trial was the crime of the century. A fourteen year old boy, Bobby Franks, was murdered by two young men, Nathan Leopold and Richard Loeb, both from wealthy and socially established Jewish families, simply to commit the perfect crime. At their trial, the famous Clarence Darrow conducted a defense based upon psychological testimony, and captured the attention of the nation.

With the Leopold and Loeb case, the attention of the nation and world was once again focused on Chicago because of a murder. The circumstances of the crime involved the murder of a young boy, Bobby Franks, by Nathan Leopold and Richard Loeb, young men from wealthy Jewish families who said they killed their fourteen year old victim, whom they didn’t know, because they wanted to commit the perfect, motiveless crime (Crimes of the Century p.13-47). The case was a national and international cause celebre.

Although their plans to conceal their identities and collect a large ransom were elaborate and intricate, Leopold and Loeb were caught almost immediately because Nathan Leopold dropped a pair of glasses near to where the body of Bobby Franks had been left. The glasses had a special patented spring for the expensive horned rim frame which had been sold in only one place in Chicago, and purchased by only three people, including Nathan Leopold. Once in custody, both Leopold and Loeb showed no remorse and confessed in great detail to the crime, both to the authorities and to the press.

Their separate confessions, available here, (Leopold’s and Loeb’s) are consistent in their description of the details of the crime, except that each claimed the other actually committed the blows which killed Bobby Franks. In addition to their confessions to authorities, both Leopold and Loeb made many incriminating statements to the press, and described their plans to commit this crime and their elaborate self justifications for the murder, including the invocation of German philosophers, such as Friederich Neitzche. Their friendship had been marked by fantasies and delusions of grandeur, highly ritualized games with elaborate plots and counterplots, and the planning and carrying out of previous criminal activities together. Their friendship also had overtones of homosexuality. Several books have been written about the case, and at least four feature films have been based on the circumstances of the crime.

What drove the interest of the press and the public, in addition, was that the two confessed murderers were both sons of prominent and very wealthy families.