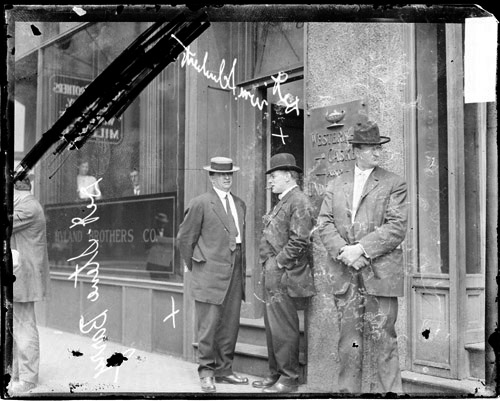 Police Detectives Steve Barry and William Schubert standing outside the doorway by the Holand Brothers Co.

Summary Informal portrait of police detectives Steve Barry and William Schubert standing outside the doorway by the Holand Brothers Co. in Chicago, Illinois. The men were associated with the investigation of the murder of William (Dutch) Gentlemen (also known as the Enright case). This image was probably taken at the time of the murder inquest held at the Harrison Police Station in Chicago, Illinois. Maurice Enright, a business agent for the Steamfitters and Helpers Union, Local 520, confessed to shooting and killing William (Dutch) Gentleman at Patrick O’Malley’s bar on 162 North State Street in the Loop community area of Chicago, Illinois. He was also accused of murdering Vincent Altman and William Dutch Gentleman.

Notes A portion of this photonegative taken by a Chicago Daily News photographer was published in the newspaper on June 7, 1911. Articles related to the image were published bewteen June 1 and 7, 1911.

Other images from this year